Opening of GIS lab at KazNU

On Nov 8 the new GIS computer lab at the Faculty of Geography, Kazakh National University named after Al-Farabi was opened. In a ceremony led by KazNU First Vice Rector Burkitbayev Mukhambetkali Myrzabaevich and Faculty Dean Vitali Salnikov, the newly installed lab was dedicated to the first group of students registered in the Geoinformatics MSc program. 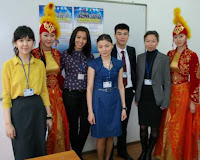 The Geoinformatics MSc curriculum as well as the lab design were developed under the Tempus project 510978-TEMPUS-1-2010-1-AT-TEMPUS-JPCR - "Geoinformatics: Managing Energy, Resources, Environment - GEM", led by the University of Salzburg's Z_GIS in cooperation with academic partners from Hungary, Netherlands, Kyrgyzstan, Tajikistan and of course Kazakhstan.

The opening was honored by an address from Shaizada Tasbulatova from the National Tempus Office in Kazakhstan, and best wishes from the European Association of Geography Students (EGEA), conveyed by its president, Svetlana Samsonova. Leaders from several other Kazakh Universities joined in today's celebrations.

Department chairs, teachers and graduate students from the Department of Geography, Planning and Cadastre and the Department of Cartography and Geoinformatics had worked hard over many months to make this teaching lab a reality, with very special thanks going to Aizhan Assylbekova for her tireless initiatives towards building this new teaching and learning resource! 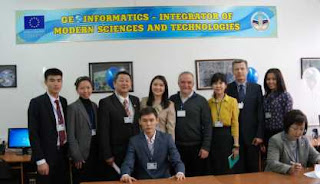