Led by the University of West Hungary (UWH), KTH Stockholm, University of Greenwich and the University of Salzburg contribute to this initiative as European partners, jointly developing curricula, learning materials, dissemination and outreach activities and quality management for graduate Geoinformatics studies now soon available in Uzbekistan, after they had been established in other Central Asian countries through the Tempus "GEM" project.

Prof. Bela Markus from UWH as project coordinator opened the kick-off meeting at TIIM and gave an extensive overview of project objectives and management. Hosted at TIIM, this event was introduced by Rector Professor Uktam P. Umurzakov, followed by the remarks by European Union Ambassador Yuri Sterk (photo: sitting next to Rector Umurzakov) on the development of relations between Europe and Uzbekistan. 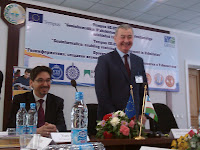 Dr. Odil Akbarov, head of the Land Tenure Development Center at TIIM managed to get the GEoUZ-Initiative off to an excellent start with this meeting, commenting that "Uzbekistan needs highly qualified Geoinformatics experts, contributing to the evolution of the country through this aptly named project - Geoinformatics-enabling sustainable development in Uzbekistan".